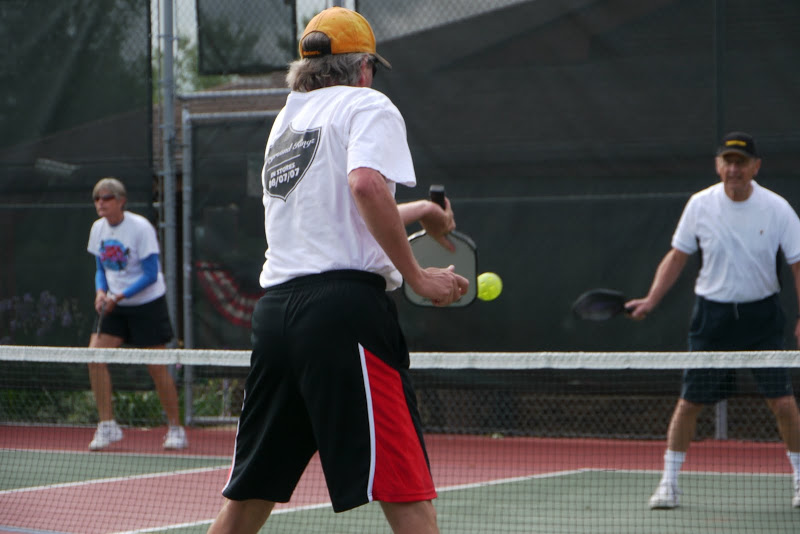 Pickleball is a newer sport that goes far beyond simply hitting a ball with a paddle. In Tellico Village we have refined pickleball into a pastime and lifestyle that melds well with the spirit of our community. For those not familiar with the game, it is played on a relatively small court with a plastic ball. The tennis players used to complain we were too loud, but the fact is we were just having too much fun.

In 2007, I discovered pickleball after being arm-twisted on exiting the racquetball courts. It took just two days to get me hooked with our 40 members on two courts. Today I am president of the Tellico Village Pickleball Club and we now sport 380 members on eight new tournament-sized courts.

Needless to say, we are an active group by any standard. Each year, we sponsor about four social events: a boat outing, gathering for hotdogs and hamburgers, our holiday cookie swap, and root beer floats. Anyone can participate. In fact, I’ve met players involved with many other social clubs from quilters to motorcycle riders.

Pickleball is what you make it. It can be a fast sport, or a gentle exercise for those with knee and hip replacements. To accommodate all needs, we divide our membership into five skill groups. We also have women or men-only play, a league, free training, evaluations and tournament preparation.

Yes, many of our players look forward to strong competition, and pickleball is big in Senior Olympics throughout the country. Each year, we sponsor two or three tournaments here in Tellico Village. Our members participate in tournaments from New Orleans to New York. We even have a few national medalists in our ranks. I’ve driven to Cleveland with friends to play, and flown my little airplane to tournaments in several states.

Although competing is fun, on most days, I head to the courts to meet with good friends for leisurely play. Sessions normally last two hours and I’ll often return later to play with one of several invitational groups. Just sitting on the bleachers, talking with friends, and watching the play is enough to enjoy a beautiful day. I can’t even begin to tell you how many friendships I’ve watched develop on the courts: even marriage in a few cases. And on Mexican Mondays, a hungry crowd of players shows up to our local Mexican restaurant for more fun.

Tellico Village can claim to be the 10th largest pickleball community in the world, and with eight new courts, we plan to expand rapidly. I’ve heard people say that Tellico Village is like summer camp. You wake up in the morning and decide how to stay entertained – and that’s easy with pickleball.