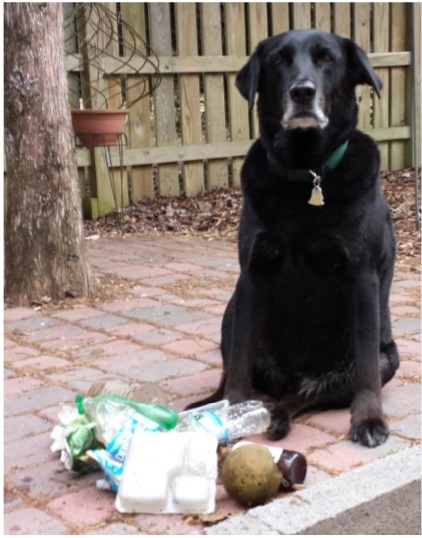 Max A Pooch www.maxapooch.com the black Labrador retriever who is a resident of Tellico Village and is best known as the Black Lab that turns green had a busy week last week. The uncanny canine appeared as the entertainment on April 14 at the annual Tellico Village Rover Run annual meeting. Next, on April 15 he was featured on NBC WBIR Channel 10’s Live 5 at 4.

Then on Saturday, April 18, Max A Pooch was part of EarthFest Knoxville where he met hundreds of fans and was a featured performer.

Pooch’s act includes sorting recyclables from non-recyclables and picking up litter and putting it in its place.

Which leads to the question, “If picking up litter is so easy, why don’t more humans do it.?”

As Max A Pooch performs his sidekick Keith Sanderson discusses the fact that litter is more than a cosmetic problem, it is an economic and environmental problem. He provides examples of both, including:

Sanderson said, “Max A Pooch hates to see anything thrown away because he was discarded. He ended up at an animal rescue, and had he been euthanized he would have ended up at a landfill like a piece of trash. His message is a larger one. It is that is time we think before we throw anything away, whether is a puppy or a piece of plastic.”

Max A Pooch is also the inspiration for the popular Pet Life Radio Network radio show Max A Pooch’s Awesome Animal Advocates which has had such notable animal advocates such as Cesar Milan the Dog Whisperer, TV Celebrity Bob Barker, Nat Geo Wild’s The Incredible Dr. Pol, and more.